The Basics to Acceptance on Lake Ontario, an article explaining how it works

Time­ on­ Time scoring is not new. It has been widely used nationally and internationally as a valid method to score handicap yacht racing. The most well­ known recent use of Time­ on­ Time was the PORTSMOUTH Handicap numbers, a predecessor to our own PHRF system, which for many years provided an easily implemented handicap system for local racing.

What If The Initial Conditions Change?

Physical Parameters That Affect A Race

How Does Time­ on­ Time Scoring Help?

What to Expect In Typical Races

Before getting into the technical aspects of scoring systems, it’s important to understand the difference between a handicap system and a scoring system and how both are implemented in PHRF.

A handicap system is the method by which numbers are generated representing the speed potential of individual boats or Boat Classes.

In general there are measurement rules and performance rules.

Measurement rules try to predict boat performance by complicated physical measurements of boat dimensions. On the other hand performance rules observe the difference in the Speed Potential of boats and use this difference to obtain a handicap number.

PHRF is, by definition, a performance rule!

A scoring system is the mathematical method used to correct races using the numbers generated by a handicapping system. There are basically two types of scoring systems:

Time­ on ­Time, and Time on­ Distance, both of which will be further clarified.

As an additional example, we can set up a couple of hypothetical test races, each with only two contestants. Two boats will compete in this race, (Boat A) with a handicap of 1.00 and (Boat B) with a handicap of 0.90. For purposes of this example we will assume that the handicaps are correct and the boats are equally well sailed.

Since we already know that the boats were correctly handicapped and equally well sailed, the corrected race should end in a tie.

As predicted, the boats have equal corrected times and the race is a tie. See Fig. 1.

We can now correct the same race with Time­ on ­Distance scoring. However, we must first determine the Time­ on­ Distance handicap for (Boat ) and (Boat B). Since both boats were equally well sailed, we will assume the difference in their finish time was due only to the difference in speed potential between the boats. In Time ­on­ Distance scoring this difference is the handicap and must be subtracted from the results by the handicap system. (Boat B) finished 1 minute and 20 seconds (80 seconds) behind (Boat A). Therefore, if (Boat A) has a handicap of 0 seconds/mile, (Boat B) must have a handicap of 80 seconds/nautical mile greater to compete on an equal basis.

What If The Initial Conditions  Change?

Let’s assume that for this next hypothetical race, the same boats race, this time in light wind conditions.

(Boat A) travels at 3 knots and completes the course in 20 minutes.

Again, the race ends in a tie.

If we use Time­ on­ Distance scoring however, the results are quite different.

(Boat A) has the lowest corrected time and therefore is the race winner even though both boats were equally well sailed and should have tied.

Although these are very simplistic examples and admittedly make some assumptions about boat performance, they point out a basic shortcoming of Time­ on­ Distance scoring, the actual handicap given to a boat remains constant regardless of the average speed of the race.

Physical Parameters That Affect A  Race

There are many physical parameters that influence the speed relationship between smaller and larger boats.

and a host of other uncontrollable occurrences, all of which can have a dramatic impact on a boat’s finish time on the course.

How does TOT Help?

How Does Time ­on­ Time Scoring Help?

It's no secret that larger boats have an advantage upwind, especially in heavy seas (going a mile to weather usually takes longer than sailing a mile off the wind). Time­ on ­Time scoring gives more time to the slower boats in such conditions. Off wind races however, usually provide an advantage to small boats. These races are generally faster and Time ­on ­Time scoring correctly allows the slower rated boats less handicap.

In light wind conditions, tall masted boats seem to catch more of the "higher air" due to vertical wind gradient and are less affected by leftover sea conditions. Again, because the average boat velocities are slower, the races take longer to complete and the smaller boats get proportionally more handicap time.

In summary, Time­ on­ Time scoring provides a first order correction for the speed of the race. The correction provided by Time­ on­ Time scoring tends to compensate for major racecourse phenomena that make individual races unequal. This is of particular importance for port­ to­ port/long distance races where a balanced mix of upwind and off wind work cannot be guaranteed.

The only instance when Time­ on­ Time scoring theoretically fails is when the boats completely stop moving. In this case, handicap builds up without a change in relative distance between boats. In practice however, this rarely results in significant errors since boats seldom completely stop during a race, and when they do, the race is frequently abandoned due to time limitations.

A counter argument can be made that Time­ on ­Distance scoring, on the average (over a number of races), can be just as equitable. This is probably correct, but most would rather sail a season of races where each race was as equitable as possible instead of trading the advantage from boat to boat.

Time­ on­ Time scoring is a positive step in that direction.

Time­ on ­Distance scoring requires an accurate measurement of the course distance.

While this may not seem like a major problem, unless highly accurate electronic navigation gear is available or the course is set on geographically known marks, there can be considerable error in estimating the actual rhumb line distance. The handicap error is directly proportional to the error associated with measurement of time.

At the inception of PHRF­ Lake Ontario, Time­ on ­Time scoring was proposed and included in the PHRF­-LO Charter. Although Time­ on­ Time scoring is not new, Lake Ontario was, to the best of our knowledge, the first to implement it through PHRF handicapping.

Subsequent to the initial inclusion, Charles Kramer of Sodus Bay Yacht Club, a PHRF-­LO Handicapper, completed an analysis and derived the following formula based in part on his interpretation of the published results of the original H. Irving Pratt Ocean Race Handicapping project at M.I.T. This formula was adopted by PHRF-­LO in 1985 and represents an improvement over the conversion method that was initially used. 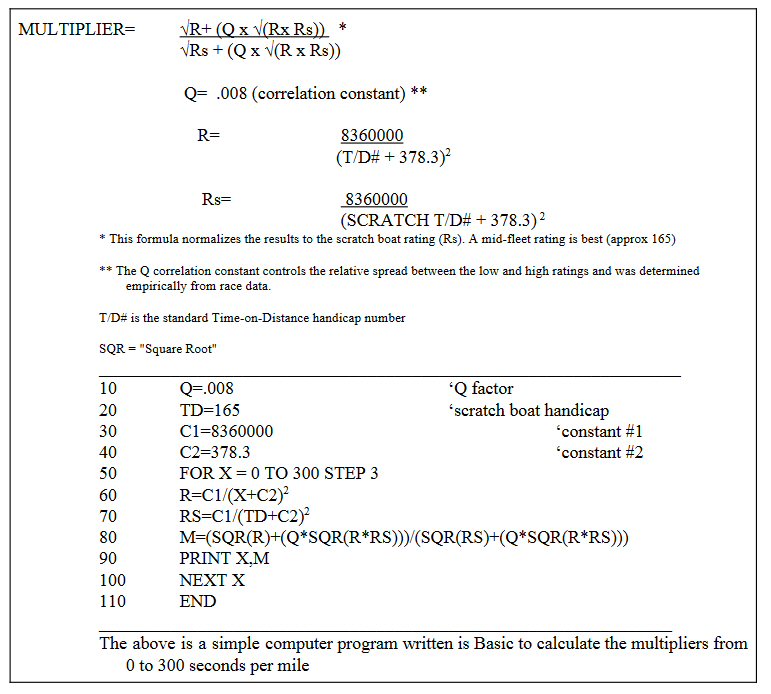 What to Expect In Typical  Races

When compared to the same results scored by Time­ on­ Distance methods, Time­ on­ Time scoring has minimal effect on the results or finish places of races within division splits of 10 to 20 seconds/nautical mile. If a change in position takes place at all, it is generally only one corrected finishing position.

However, if results are compared over large ranges in boat handicaps such as overall winners in large invitational races, the results can be more dramatic and boats may change several positions.

PHRF Lake Ontario has left the selection of scoring methods up to the individual clubs and has provided both a Time­ on ­Distance number and a Time­ on ­Time multiplier on each certificate. Reaction to Time­ on­ Time scoring on the lake has been mixed; there is a certain amount of reluctance by some clubs to accept a Time­ on­ Time scoring method partly because some participants have difficulty in accepting a non­-constant handicap. These individuals apparently feel more comfortable entering a race knowing exactly how much time is given to each yacht in the race. This problem has been partially solved by publishing a seconds/hour number along with the multiplier, but again it requires some mental calculation and is still not totally acceptable to some individuals.

Owners of larger boats also tend to object to the Time­ on­ Time scoring method primarily because they find themselves correcting behind smaller boats more often than with the Time­ on ­Distance method. (It's harder to accept correcting behind a smaller boat than a larger one.) Also, Time­ on­ Time represents a change in custom and changes in yacht handicapping are generally regarded with skepticism.

Despite this resistance to change, many Clubs on Lake Ontario have accepted Time­ on­ Time scoring as the preferred method and are using it at Club and invitational events with great success.

It is evident that the present PHRF handicaps, although adequate over narrow handicap ranges, do not seem to work over large ranges of boat sizes. This is of particular significance to small clubs where large and small boats must compete head to head.

One potential solution is to re-­handicap all boats.

This apparently is the action being taken at PHRF of the Northwest, according to Frank Cole in the May/June 1985 issue of The PHRF Journal.

A second method is to provide a correlation factor adjusting the handicap spread between large and small boats. This correlation factor is implemented in the Time­ on­ Time conversion formula with the "Q" constant, which can be adjusted from area to area or race to race if necessary